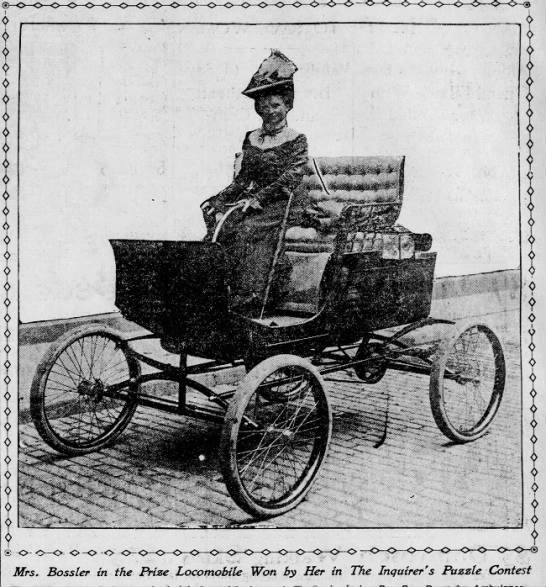 Read the coverage of the contest held by the Philadelphia Inquirer during the summer of 1900 on the pages attached below.

Read about the Locomobile at the link below.
https://en.wikipedia.org/wiki/Locomobile_Company_of_America

What did people do with their spare time in 1900?
Imagine, no computers, no internet, no radio, no television. You could read a book or a newspaper, but if you wanted
something more interactive, what was available?

Some newspapers offered puzzles in a serial format over
a number of editions with prizes for those who were able to
solve the puzzles. On May 27, 1900, the Philadelphia Inquirer newspaper announced a new
contest, the Captain Kidd Hidden Picture Series with some fantastic prizes. Captain Kidd was convicted of piracy and hung in 1701. You had to pore over a drawing and find six hidden objects. One of the objects could possibly have once been in the pirate's chest. The other five that you had identified could be listed in any order.

The contest was announced on the front page with a photograph of the grand prize, a 1900 Locomobile worth $750. The name of the vehicle was derived from combining the words locomotive and automobile. An acceptable minimum wage at that
time was about $8 per week. If you could somehow manage to put $1 a week away to buy the car you
could expect to be driving in 15 years! Another way to consider the value of the prize was that houses
built on the west side of the railroad tracks in Wenonah were supposed to be worth a minimum of
$1,000 and houses on the east side $2,000. The top 20 contestants would get an expense paid trip to Alantic City.

Mrs. Frances Bossler, a 23-year old Wenonah woman, who at that time had no children, and her 26-year old husband, Frank, put some effort
into solving the puzzles. He worked as a telegraph operator at the Pennsylvania Railroad's Wenonah station. Frances was
tied with six other people for coming up with the correct solution on all nine installments
of the puzzle. All seven were summoned to the Inquirer's office for a drawing to decide the winner. But cell
phones not being invented, only five could be located in time to appear for the drawing; the missing
two were represented by proxy.

The drawing followed an interesting double blind drawing format and at first Mrs. F. J. Bossler had no
idea that she had won. Soon, however, it was reported that she was the happiest woman within 300
miles of the newspaper office. The other contestants graciously congratulated her. Mrs. Bossler had never ridden in any automobile prior to the contest. She was taken out for a test drive in the vehicle and thoroughly enjoyed her ride. She was even allowed to
take the controls, I would say “the wheel,” but the vehicle had no steering wheel.

She won the drawing on Sunday and on Monday she went to bring it back to Wenonah. She met her
instructor at the Inquirer office and drove with him to the ferry which took them to Camden. Ignoring the summer rain,
Mrs. Bossler drove the locomobile home to Wenonah where she was met with an ovation. The steam powered two cylinder vehicle
was the first automobile to be owned by a Wenonah resident.

By the time of the 1910 census, the couple had relocated to the New Haven, CT area. In 1918,
when Frank registered for the World War I draft, he was working as a wire chief for the New York and
Connecticut News Bureau. They had one son, Franklin. Frances passed away in 1960, followed
by Frank in 1961. Both were buried in Montowese Cemetery in North Haven, CT.

Locomobile taken on tour before contest.

Talk of an automobile race from Philadephia to Atlantic city.