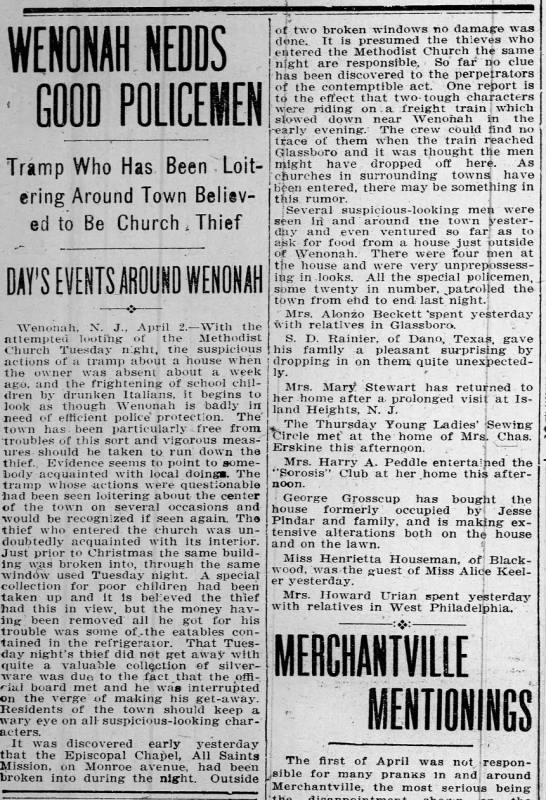 DAY'S EVENTS AROUND WENONAH
Wenonah, N. J. April 2 - With the attempted looting of the Methodist Church Tuesday
s actions of a tramp about a house when the owner was absent about a week ago, and the frightening- of school children by drunken Italians, it begins to look as though Wenonah is badly in need of efficient police5 protection. The' town has - been particularly free from 'troubles of this sort and vigorous measures should be taken ti run' down the thief.. Evidence seems to point to some-Tjody:acquainted with local doing. The tramp whose .actions were questionable iiad been seen loitering about-the center of the town on several occasions and would be recognized if seen again. Tha thief who entered the church was undoubtedly acquainted with its interior. Just prior to Christmas the same building was broken into, through the same wind6v used Tuesday night. A special .., , .,.;.... .. ...... . i ,: i j ..... . l . .. .1 . i ' taken up and it is beHeved the thief had this in view, but the money having' been removed' all he got for his trouble was some of -the eatables contained in the refrigerator. That Tuesday night's thief did not fret away -with quite a valuable collection of silver--rvare was due to the fact that the official board met and he was interrupted on the verge of making- his get-away. Kesidents of the town should keep a "wary eye on all- suspicious-looking characters. . ' It was discovered early yesterday that the Episcopal Chapel, All Saints Mission, on Monroe avenue, had been broken into during the night. Outside of two broken -windows no damagre was dene. It is presumed the thieves who eiitered the Methodist Church the same night are responsible, i So far no clue has been discovered to the perpetrators of the contemptible act- One report is to the effect that two-tough characters were riding on ; a. freight train which slowed down near Wenonah in the -early evening- The crew could find no trace of them when the train reached Glassboro and it was thought tile men might have . dropped off here. . As 'churches in surrounding towns have been entered, there may be something in this rumor. - Several suspicious-looking men were sen iij and ' around me town Yesterday and even ventured so farj; as to ask for food from a house just putside of Wenonah. There were "four jnen at tfie house and were very unprepossessing- in .looks. All the special policemen. some twenty in number, patrolled the- town from end to end last nigh t.t Mrs. Alonzo Beckett "spent yesterday with relatives in Glassboro. j i S. D. Rainier, of jDano, Texafc. gave his family a pleasant surprising- by dropping in on themi quite unexpectedly. ' ;.- , ... '. j . Mrs. Mary! Stewart has returned to her home after a. prolonged visit at Island Heights, N. JY ' I pCircle met? at the' home of Mrs. Chas. Erskine this afternoon. J , Mrs. Harry A. Peddle entertained the "Sorosis" Club at her. home thi$ afternoon. - - I i George Grosseup has bought the house formerly occupied by! Jesse Pindar arid family, and is making- extensive alterations both on th house and on the lawn. Miss Henrietta Houseman, of ! Blackwood, was-the guest of Miss Alide Keel-er yesterday. j Mrs. Howard TJriaii spent yesterday with relatives in West Philadelphia. .