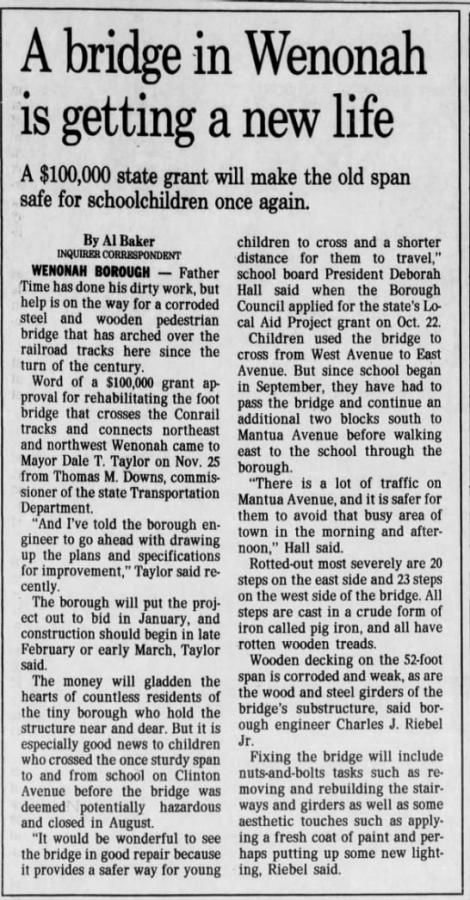 1992-12-13 The Philadelphia Inquirer
By Al Baker
INQUIRER CORRESPONDENT
WENONAH BOROUGH - Father Time has done his dirty work, but help is on the way for a corroded steel and wooden pedestrian bridge that has arched over the railroad tracks here since the ; turn of the century.

Word of a $100,000 grant ap-1 proval for rehabilitating the foot bridge that crosses the Conrail tracks and connects northeast and northwest Wenonah came to Mayor Dale T. Taylor on Nov. 25 from Thomas M. Downs, commissioner of the state Transportation Department.

"And I've told the borough engineer to go ahead with drawing up the plans and specifications for improvement," Taylor said recently.

The borough will put the project out to bid in January, and construction should begin in late February or early March, Taylor said.

The money will gladden the hearts of countless residents of the tiny borough who hold the structure near and dear. But it is especially good news to children who crossed the once sturdy span to and from school on Clinton Avenue before the bridge was deemed potentially hazardous and closed in August.

"It would be wonderful to see the bridge in good repair because it provides a safer way for young children to cross and a shorter distance for them to travel," school board President Deborah Hall said when the Borough Council applied for the state's Local Aid Project grant on Oct. 22.

Children used the bridge to cross from West Avenue to East Avenue. But since school began in September, they have had to pass the bridge and continue an additional two blocks south to Mantua Avenue before walking east to the school through the borough.

"There is a lot of traffic on Mantua Avenue, and it is safer for them to avoid that busy area of town in the morning and afternoon," Hall said.

Rotted-out most severely are 20 steps on the east side and 23 steps on the west side of the bridge. All steps are cast in a crude form of iron called pig iron, and all have rotten wooden treads.

Wooden decking on the 52-foot span is corroded and weak, as are the wood and steel girders of the bridge's substructure, said borough engineer Charles J. Riebel Jr.

Fixing the bridge will include nuts-and-bolts tasks such as removing and rebuilding the stairways and girders as well as some aesthetic touches such as applying a fresh coat of paint and perhaps putting up some new lighting, Riebel said.